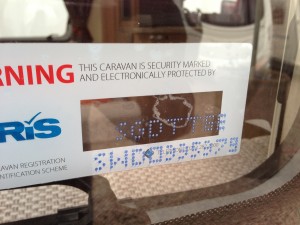 If you are looking to buy a caravan then this is something you should definitely take note of. In this post I am going to show you just how to decipher a caravan VIN number. The reason for this is that there is a few things we can learn from the VIN number of a caravan, this information could save you a lot of money!

So without further ado, let’s get on with it.

I think a quick definition is in order here:

A caravan VIN (Vehicle Identification Number) number, also referred to as; serial number, CRiS number and chassis number is a 17 digit code that is and has been given to each and every caravan made in the UK (and some of Europe) since 1992. The VIN number is unique to each caravan and is used by CRiS to keep a track of who owns what caravan. The number given to the caravan is etched on the corner of each window (as photographed).  As I said above, the caravan VIN number can give us some key information that you will find useful when purchasing a caravan. Click to get help finding your VIN.

[alert-note] TIP: You can use Caravan VIN Decoder tool to decode your VIN automatically [/alert-note]

Using the VIN number for the image above I will now demonstrate how to decode the caravan VIN number.

I hope will help and has not confused you too much but if you do have any questions I would be happy to answer in the comments section below.

202 thoughts on “How to decipher a caravan VIN number”

Buying your first caravan? My book will guide you through to help save you time and money. Get it here

Affiliate Disclosure: As an Amazon Associate I earn from qualifying purchases.

This site uses cookies from Google (among other providers) to deliver its services, to personalise ads and to analyse traffic. Information about your use of this website is shared with Google. By using this website, you agree to its use of cookies. However, you may visit "Privacy Policy" for more information and to provide a controlled consent.
Cookie SettingsAccept All
Manage consent

This website uses cookies to improve your experience while you navigate through the website. Out of these, the cookies that are categorized as necessary are stored on your browser as they are essential for the working of basic functionalities of the website. We also use third-party cookies that help us analyze and understand how you use this website. These cookies will be stored in your browser only with your consent. You also have the option to opt-out of these cookies. But opting out of some of these cookies may affect your browsing experience.
Necessary Always Enabled
Necessary cookies are absolutely essential for the website to function properly. These cookies ensure basic functionalities and security features of the website, anonymously.
Functional
Functional cookies help to perform certain functionalities like sharing the content of the website on social media platforms, collect feedbacks, and other third-party features.
Performance
Performance cookies are used to understand and analyze the key performance indexes of the website which helps in delivering a better user experience for the visitors.
Analytics
Analytical cookies are used to understand how visitors interact with the website. These cookies help provide information on metrics the number of visitors, bounce rate, traffic source, etc.
Advertisement
Advertisement cookies are used to provide visitors with relevant ads and marketing campaigns through our advertising partners (including Google Adsense). These cookies track visitors across websites and collect information to provide customized ads. Click here find out how Google uses your data here
Others
Other uncategorized cookies are those that are being analyzed and have not been classified into a category as yet.
SAVE & ACCEPT